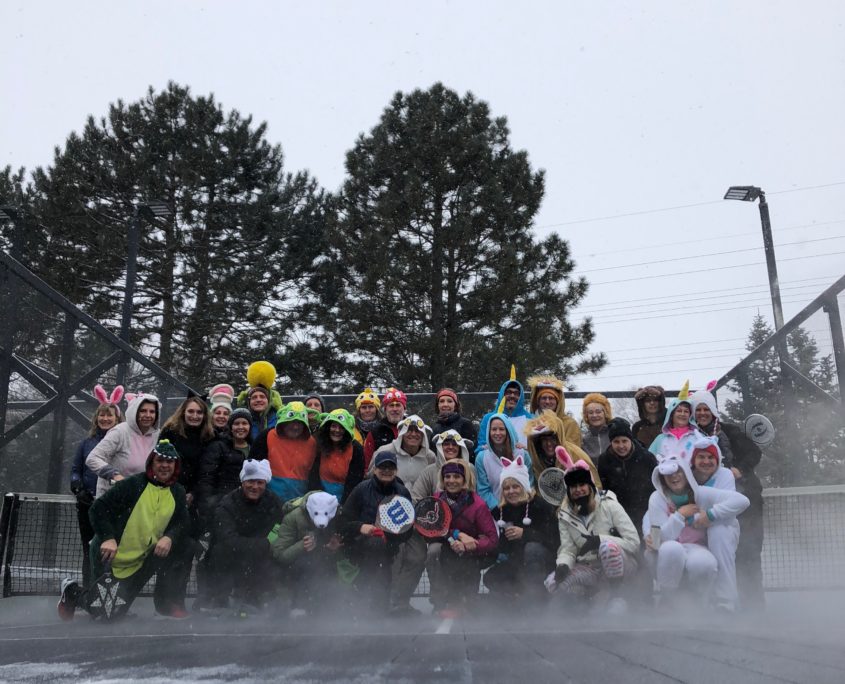 Through blustery elements Noah’s Ark managed to land safely at the KPTC and release a variety of wild animals to the courts.  Perfect theme as the extra fur was needed during this cold/snowy winter day to complete this epic tournament.

It was an amazingly well run tournament by Ben McConnachie-Howarth and Jodi Facchini who outdid themselves with fantastic culinary delights, exciting draws, fun theme, and fantastic bar set up.  They had hot apple cider, and a variety of beverages to please all. They ran a 3 grouped 36 player pro-set draw which had some very exciting animal pairings.  Even through extremely cold temperatures and snowy weather the paired furry animals  jumped to the courts in some very hard fought games.  Everyone helped out to make sure things went smoothly (in KPTC style)  with shoveling and sweeping of the courts between matches .

In the first, Lemur’s (Deb and Mike) VS Narwhal’s (Mark and Sandi).   This was a hard fought match that went to a tie-breaker which saw the Narwhals taking down the Lemur’s

The second semi’s had the Caterpillar’s (Brad and Louise) VS  Unicorn/Cow (Ben and Jodi).  This fun match ended up with the caterpillars squeaking out a victory.

In the finals, with the crazy elements (through the thick steam and wet snow)  the Caterpillars (Brad and Louise)  managed to barely find victory in a very hard fought, but fun match which ended in an 8-6 pro-set win over the Narwhal’s (Mark and Sandi)

There was also a special presentation prize for best costume.  All that participated in the tournament came in costume which added to the day greatly, and all of the costumes were fantastic!  In the end there could only be one winner and that went out to Deb and Mike Gallagher that came as a pair of Lemur’s. (we all know it was Mike’s decision) 😉

Special thanks goes out to Mark Harrop for generously donating a Spirit of York prize pack to the winners, and all the help Terry did keeping the courts in great working order (repositioning the heaters)  especially during the difficult weather conditions. AND of course a special thank you to our tournament directors Ben and Jodi for all the hard work in making it all come together…

See you next year!

Want to join the discussion?
Feel free to contribute!

A great read regarding another successful Christmas Kaos Tourney at the KPT... Message from the KPTC Executive regarding stage1 of re-opening the club
Scroll to top